Call him Sonny Moore, call him “that screamo douche ruining edm”, call him “the biggest bass music/bro-step producer on the planet”, call him a “f*ggot”.

This kid is making a f*kin’ racket.

At no point in recent history can i remember an act as polarizing as Skrillex. When his Full flex experss tour rolled across the Northcoast i was intrigued but not convinced. Familiar with dub music like Lee Perry & the sounds of euro dubstep producers like Skream, I’d never really given Skrillex a serious listen. But as a long-time Diplo fan with an interest in some of the other DJ’s on the bill (Grimes, Pretty Lights etc) it seemed like an in interesting afternoon in the summer sun.

……
….
…
..
Are they picking on the popular kid or just mad he’s got a blacker shirt than their favorite rock and roll band? Seems that electronic music is hated the most by people whose computer skills never eclipsed updating their status and sending email.

All the controversy piqued my interest so I found some cheap tickets on kijiji and decided I would try to “delete my life”.

An internal demand for alcohol and roti brought us to the event a bit late. I knew it wasn’t going to be the average rock show when the guy at the atm outside the venue bragged about his collection of citrus fruits and hard alcohol.

PARTY TIP: The fruit will be confiscated by security. Hand it over while apologizing profusely. It will help you avoid the frisk that will expose your booze stash.

Upon arrival I was struck with how diverse the crowd was. To help illustrate the scene, I snapped a few pics to help categorize the different types of Skrillex fans.
:::::::
:::::
:::
:
Skrillex Fans with the Haircut 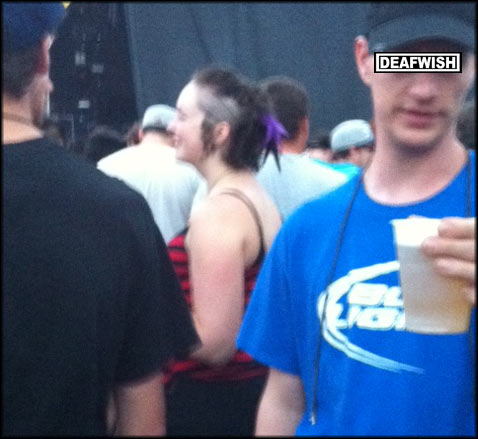 Slightly more terrifying than a lesbian jeep rally, but harmless on the overall. You’ve seen these chixx (and doodz) on the bus, at the mall and on sites like this one. One day they’ll show their kids the instagram photos & blush.
::
::::
:::::::
:::::::::
Family Day Skrillex Concert Go-ers
This segment was bigger than I had expected. Parents who were kind enough to buy an extra $85 ticket to escort their kid and keep the $4 waters flowing. One mother was even kind enough to keep her daughter upright in the beer line while she tripped out and skittered between “f*ck me” & “f*ck you” faces – eyes rolling back and forth in her skull.

This particular Dad maintained his Dadly duties by frowning everytime a DJ or passer-by said the f-word. 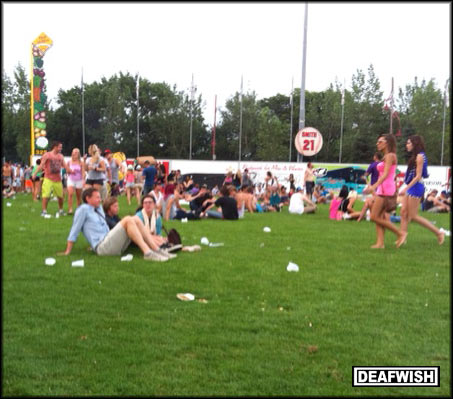 It’s called ‘bro-step‘ for a reason & the bro’s came out in full effect. Although there were some disturbances and ‘come at me bro’ type moments. I was lucky enough to see the solidification of the all-bro peace treaty of 2012. 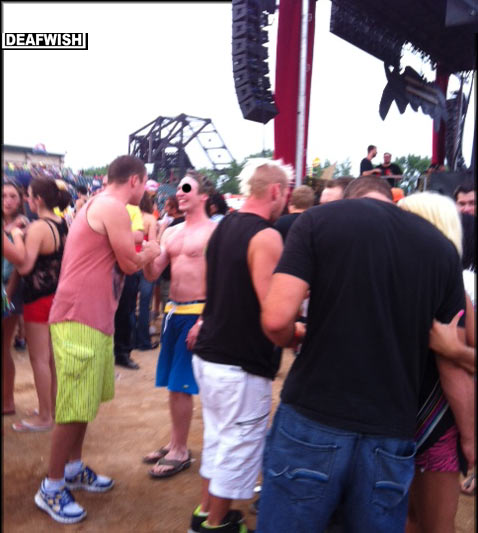 2 tha haterz: You could have easily scored a girl that was out of your league at this show. Sure, her taste in music would be questionable to you; but get out of the circle jerk and get some action.

Here’s a group of bored ladies harkening back to their choir days and forming a massage train.

Guess which one is named molly.

Back on the topic of music, Diplo came out and pumped some sothern style beatz and all the ‘cups in the air’ chants one would expect. The large LED screen pushed 8-bit images while flashing adverts for his Mad Decent label.

He then morphed his set to be more uptempo, “4 on the floor” dance, before bringing it back to the slower hip-hop infused jams he started with. Overall, the crowd was easy to please and he gave us what we were standing there for.

Unfortunately, the Brostep Peace agreement could not be upheld and some people had to be ejected. 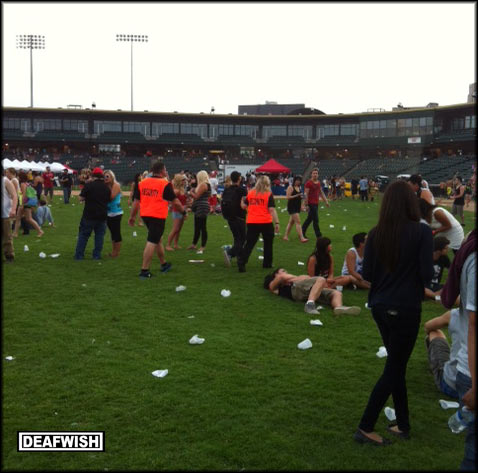 Also, as a note to all the concert promoters out there….

People want to maintain order, but if a garbage can is more than 5 steps away shi~ like this will happen: 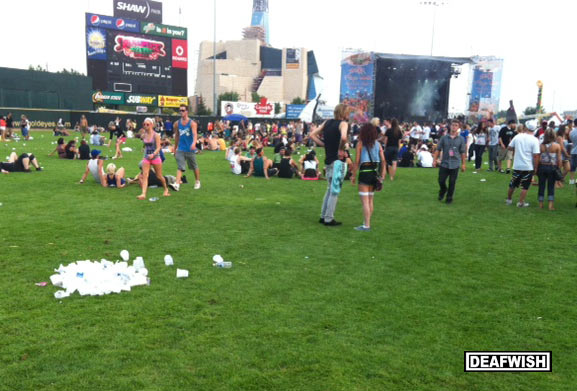 The neat pile will eventually be stomped through by a angry no-shirt on a bad high.

Pretty Lights came out next & lit up the setting sun with chilled out hip-hop stylez and an impressive stack of LCD lights. After a full day of smoke & booze in the sun, the crowd was ready to groove.

His set stayed mid-tempo and laid back, with a few explosions of aggression. Although I had expected to see Diplo in this slot, the man born Derek Smith showed he has what it takes to keep a few thousand people bumpin’…

With the sun set, the pie eyed crowd was getting antsy.
.
..
…
….
Then
…..
he appeared;
stage blowing smoke, lazers blasting & most people feelin’ the vibe.

Was he DJ’ing or pushing play? The only people who cared were letting their thoughts get in the way of a loud bass groove.

But he & his team have built up a sound and a show that, when seen live, is hard to scoff at. Other producers will talk shi~ about how easy it is to use the plug-ins and others will say it’s not “music”, but in the end none of that really matters.

Fad or not, smiles were shared, drinks were drank and the air was ripped with bass. If you wanted to open your ears & mind to what’s “current” then you could have had a good time.

Agree or Disagree? Like or Dislike? Put it in the comments bro.