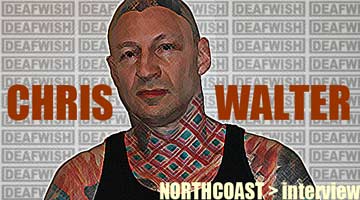 R U STOOPID?!;!? >> Chris Walter is a Vancouver writer.!. Author of more than twenty books, he has also contributed to 4real pubz like The Georgia Straight, Nerve, Razorcake, The Big Takeover, Mass Movement, Vice, Loud Fast Rules, and Absolute Underground.

His latest book SNFU… What No One Else Wanted to Say is slated for release on July 21st, 2012. Leading up to the release of his book, Chris will be filing reportz some bands you should listen to into the DEAFWISH files.

I’m Chris Walter. I write books, which is something of a miracle considering that they kicked me
out of every school I ever attended. That I’m not dead or in jail is even more of a mystery. I’m a
lucky guy.
….
…
..
.
DEAFWISH: Your next book focuses on SNFU. What inspired you to choose that band?

I wanted to cover Canadian punk bands for my first few biographies, and SNFU was imminently
book worthy. They caught my attention in 1983, though I never dreamed I would one day write
a book about them.

DEAFWISH: Was it hard to get the so-called pen to paper?

I’ll admit that the project was emotionally draining, and the year I spent
writing it took a lot out of me. And the book tour hasn’t even started yet…
.
..
…
DEAFWISH: We believe in u man! What can I learn from your book that isn’t covered in the Wikipedia article?

Well, the Wikipedia page contains about 1,000 words, and my book holds 150,000, so quite a lot.
I won’t spoil it for you.
.
DEAFWISH: Fair enough, if someone isn’t familiar with the SNFU catalog, what 3 tracks would you say really define their sound and attitude?

Everyone has different tastes, but I’d recommend “Time to Buy a Futon,”

and “Head Smashed In Buffalo Jump.”

DEAFWISH: Whoa! Good ones… I was really drunk at Canadian music week a few years ago. I’m pretty sure I saw Chi Pig go home with a legless woman because she said she had beer in the fridge. What are the odds that really happened?

Chi is gay, so it wouldn’t mean much if he went home with any woman. Personally, I don’t see
anything wrong with going home with legless women. Double amputees need lovin’ too.
..
..
.
DEAFWISH: True. You’re doing a reading in Winnipeg. What are the details on that?

GFY Press will be at the Cavern on August 24th, so bring lots of money. And rotten fruit to
throw.
.
..
Is this something you’re doing across the country?

That’s a tough one, because sure it isn’t the weather or the mosquitoes. I guess I miss my friends and family the most. Walking around Winnipeg brings back many memories, both the good and the bad. Sometimes I still call Vancouver Winnipeg by mistake, even though I’ve lived in BC for twenty years now. I also miss VJ’s and Colosseo Pizza.

They don’t put chili on burgers in Vancouver, and good pizza is hard to find.
.
..
DEAFWISH: You’re not only an author, you also run GFY Press. What’s it like to be a mega-rich publisher?

I wish. The fact that I can pay the rent is miracle enough. I hate the business side of writing, but
I can’t afford to pay someone to handle that stuff. My girl does the accounting, which is good
because I’ve never been a math whiz. Although I wish I could just write and not worry about
money, at least I don’t have to sling drywall any more. I can’t complain.
…
..
.
DEAFWISH: No one likes a complainer. Do you listen to much newer music? What’s in Chris Walter’s headphones?

I listen to music all day while writing. I have over 15,000 songs in my library, most of them
punk rock. I love the old stuff, but I also dig newer bands such as the Matadors, the Riverboat
Gamblers, The Bronx, The Meat Puppets, The Planet Smashers, The Real McKenzies, and The
Dreadnoughts; I’m all over the place, really.
.
..
…
….
…..
……
Got a question for Chris? Ask here and we’ll see if he gives a shi~ about answering. Or… get your hands on a piece of history; head over to punkbooks.com and get the book on pre-order.