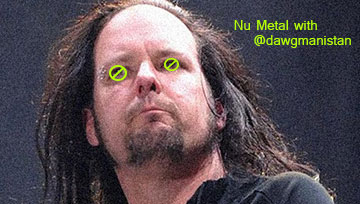 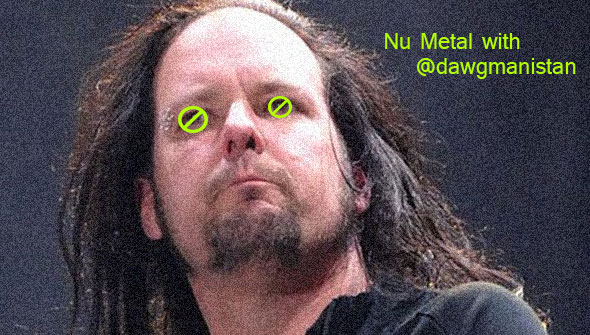 Ahh…Jonathan Davis from Korn. Nobody says “I’m a middle-aged, balding, former nu-metal demi-god who is now hopelessly lost in a sea of semen-soaked undies and sad TMZ interviews” like you, do they? For a fleeting moment, you actually looked like a fatter, more-depressed version of Adam Duritz, without the ’90s sensibility to go along with it.

I pose a morbidly serious question for you here, Johnny Boy – WHAT THE FUCK are you talking about in this interview? Are “controversial” answers like this your last, aching grasp at remaining relevant and doing 16 years olds up the butt with bottles of Orbitz? It took me 25 tries over two consecutive weeks to decipher the banal drivel that spewed from your custard-crusted lips over the course of ONE FLIPPING minute. That’s how utterly fucking batshit insane you are, Johnny Tot.

Fuckwad Johhny Boy comes off a plane and is asked by TMZ reporters the meaning Korn’s music video, Spike in my Veins. He proceeds to wax eloquent about how:

Really? IT CAN’T BE??!! If so, I know about a bajillion men out there who jizzed in their Dockers last night at the club after being ass-molested by an overweight 40 year old trying to keep up with the latest fads who are going to be taking a LONG, LONG look at themselves in the mirror tomorrow morning. Congratulations fellows! America is now a bloodthirsty communist regime thanks to those dedicated efforts at Club Dashiki!

John. You’ve fallen farther than someone who’s been in a bottomless pit for 20 years, your hairline is receding worse than your fan base and I think it’s time to crawl back to the shit-farm from whence you came and jump off the barn face-first onto a rusty rake.