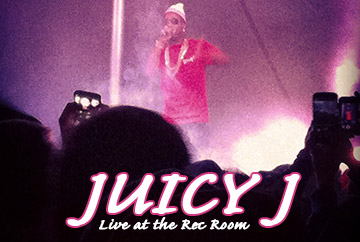 LIVE: “Is this Some Kind of Burning Man?” theTeach reviews Juicy J at the Rec Room 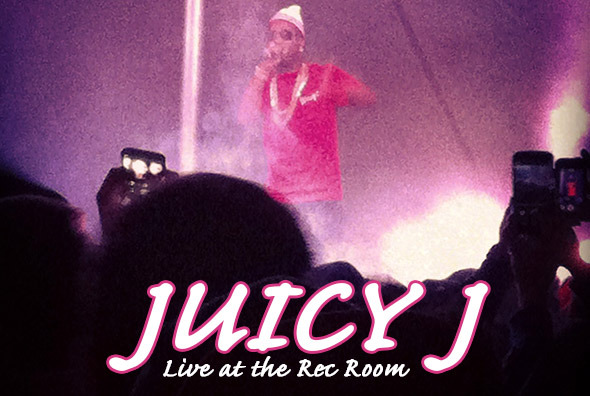 “This is kind of scary, I feel a lot of negative energy.”

“Is this some kind of Burning Man? Anything goes?”

These were two observations my friends made as we walked up to the Rec Room (rather, the back lane of this new Winnipeg venue). The promoters weren’t joking when they said this show would have a “spring break” vibe. Scantily clad girls creeped around, clearly not checking the weather before they left home for this outdoor show – foolish. Others wandering about like zombies threatening each other, puking, yelling at their peers to take care of them, to just get them outta this place.

Since the show was all ages, I just assumed all of these wasted, sloppy fun-lovers were fourteen. Do their parents know they’re here? 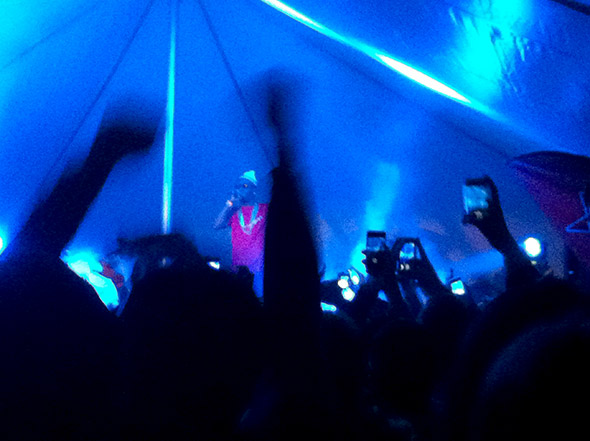 Anyway, Juicy J finally came out following the local Grippin Grain DJs who had party-goers amped up. As green smoke filled the air, Juicy J appeared and did not disappoint.

In true rap fashion he played snippets of his Three 6 Mafia bangers like “Sippin on Some Syrup“, “Poppin’ My Collar” and “Stay Fly“. Most of the excitement came from all da ladies when he eased into his guest spots on Katy Perry’s “Dark Horse” and Mike WiLL Made It track “23“. The solo tracks one would expect him to play like “Show Out“, “Bouncin’” and “Bandz A Make Her Dance” had the crowd wildin’ out.

Conclusion:
The show in all was a lot of fun, despite the fear of being drunkenly shanked at any given moment. Juicy J had a set list that appealed to all; the young whipper-snappers twerking on stage, (likely having their very first, very real, club experience), the jaded and afraid 30-somethings like me, and the lone 50ish year old stay-at-home-St.Vital-looking-mom who worked it the whole set.