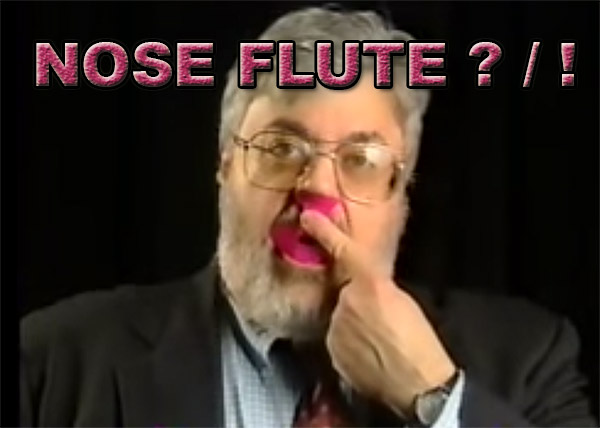 Every once and a while I will dedicate myself to delving into the wild world of people playing music on YouTube. My only general rule while spelunking through the cruel world of bedroom music is no ukulele covers.

The Ukulele cover makes me cringe on the DNA level. It’s so god damn cutesy that my visceral reaction is to distract the player with something shiny and go all Casino on their little shoe box strummer. Until yesterday, the sound of Ukulele was the sole button to my gripping rage;

Apparently I’m the last one to the rodeo here because, like cranking and pumping, there is already a whole community of people just whipping tunes out on their nose. Unlike the instrument used to win hearts in Hawaii, this little bastard provides a full on squeal that will bring the Littlest Hobo home.

Lets take a look at what’s out there.

Making Whoopie on a Nose Flute

This was the first one that I found. My only comment was “I hope this is someones dad”. The design has a very Hannibal Lector look that I must admit, still makes me uncomfortable.

This was when I decided to see what other classics are available.

Sooooooo that happened. I really hope she busts that one out on Tinder dates. Performance wise, this one is almost tolerable. She doesn’t go for the high notes and her song selection is more in line with what’s in my ear buds.

But is anyone doing the classics?

I just remembered I also hate Celtic music. But apparently this one is English Folk so I’ll just have to hate it for the Nose Flute.

A more sane person would have stopped their pursuit at this point. Nose Flutes are out there, I get, just move on.

I HAD to keep digging.

Sweet father Christmas if there is a way to avoid this hell from ever being my after life please tell me how to avoid it now.

What in the actual fuck?!; could it possibly get any worse? If I went to her apartment and looked in the fridge would there be human eyeball in the egg container?

No sane person could perform those sounds.

The practice would warp your brain.

I never thought something would make me happy to hear a Christmas song.

On a Nose Flute.

That’s what you came here for.

Tell me how you feel about it.