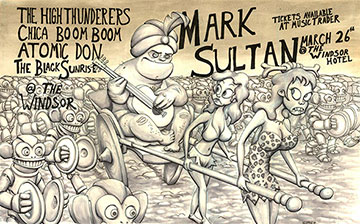 Not sure if you want to risk a Thursday hangover by coming out to the kick off of the O(h) No Festival? Eat’em Up Records has put together an awesome line-up, so take a listen before you choose the boring path.

Mark Sultan has a long history of Canadian rock’n’roll credentials. He was in the Spaceshits and Les Sexareenos plus he’s been rockin’ across the planet from Winnipeg to Russia. His show is always high energy and if he can’t make you raise your glass and dance you’re probably not out to have fun. Give this track a listen….

Overwhelm your senses with delightful noise and flailing guitar solos. The High Thunderers are the modern equivalent to your dad’s tape deck shitting itself into high volume awesomeness. Grab your hearing impaired significant other and shake a leg to this crew. Featuring members from Winnipeg legends Hot Live Guys, American Flamewhip and the Gorgon. Check out this track ‘Strong Horse’.

How can you argue with an interesting instrumentation put together by two taltented females that feature lyrics like “My Friends are playing at the Windsore Hotel – They Like to Have a good time”. Do you not like to have a good time? This show is going to be a good time. We’re predicting there will be both Whiskey & Blood happenin’ at the show and here’s the soundtrack…

Dark Surf with an ability to pound out the message when there is a lesson to be learned. Put your Rayban’s on and give this track a listen.

How’s that for a line-up? Tell us who your favorite are in the comments below or shout us out on Twitter.