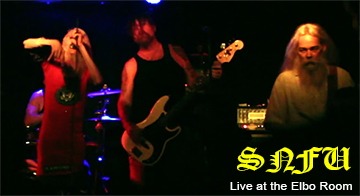 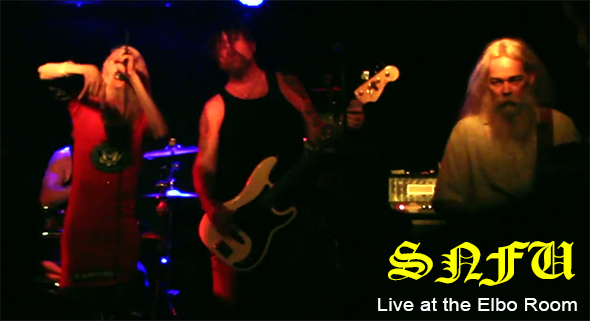 People often ask me “what does DEAFWISH mean?” and I’m forced to try and put my vision as Central Victory Officer into words. Then, I go to see live music and see someone who embodies the very spirit of everything I can’t express.

SNFU formed in 1981 in Edmonton, AB and at 51 years young Mr. Chi Pig is still doing his thing. The band changes, the bullshit of the road remains the same and he pushes on – what else would he do?

I caught up with Chi outside the venue while he was waiting out the opening bands (or “blands” as he preferred) and asked him how the tour was going. He informed me that he was happy there was only 5 more shows to go. Their current manager was acting like a fuckwit. He’d spent his Saturday chasing tail, getting no action and showing up at the Hotel in an ambulance. Chi is getting sick of this shit.

Fortunate for the band, their current bass player doesn’t drink and was able to pilot the band to the show at the Elbo Room, a San Francisco dive I know only from attending a dub DJ night with some mobile app programmers.

Tonight, it’s full of a 120ish punks ranging in age from their mid twenties to their late 40s. Waiting for SNFU to take the stage, I chat with Jennifer, a self described ‘handicapped’ fan (though it was unclear what was wrong with her) who had just discovered the band a few weeks ago. She was kind enough to help Chi and the boys load merch in the absence of their snoozing management team.

Alas, with the “blands” over with Mr Pig was allowed to get work. He pushed through the hits and let his rainbow flag fly for the San Francisco crowd. Take a look at the footage.

It wasn’t until I looked up the video for this next song, Black Cloud that I realized how hard Chi has been living. When comparing the difference 20 years make, there’s something more charming about the current version to me.

It’s a proven fact that punks won’t slow dance to 2 songs in a row, so the band picked the pace back up with a few faster numbers before pulling out one of the 90s beef tracks. I’ve personally never liked Eddie Veddar or Pearl Jam’s music – so this one made me smile.

At this point, some guy in the crowd kept yelling for the Allman Brothers. After checking in to remind myself of what exactly that sounds like it became clear that yelling ‘Allman Brothers’ is the SF equivilent to the guy yelling ‘Play Slayer!!’ at your average Winnipeg show.

Every city has a sound.

The main thing that Allman Brothers guy did for the betterment of the world that day was pay $13 to keep Chi Pig fed and inebriated. Hippie hecklers aside, this incarnation of SNFU proved that the songs still rock and Mr. Chi pig is the gay-punk priest of livin’ DEAFWISH.