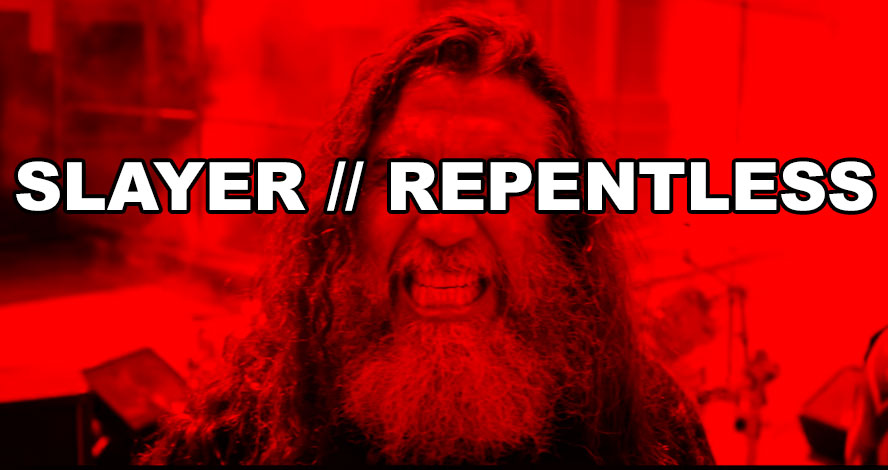 The remaining parts of the thrash legend that is Slayer released the first video from their 12th studio album – Repentless.

The video features a good amount of blood and b-moviesh violence while ‘Slayer’ plays in the yard, defended by riot cops. Visually, it’s pretty cool. As a song, it’s a middling effort.

To our ears, it starts fairly strong, then just kind of holds at a 6-7 outta 10 before getting boring. Your instinct will probably be to close the tab, but if you like seeing people get cut it’s worth sticking around.

As the guys over at Metal Injection pointed out, the video includes a whole shwackload of minor celebrity cameos, including Danny Trejo (Machete, Con Air), Tyler Mane (the first X-Men movie, Michael Meyers in the Rob Zombie Halloween’s), Derek Mears (Jason Voorhees in the remake of Friday the 13th), Vernon Wells (Mad Max 2: The Road Warrior), and Sean Whalen. We’re going to take their word for it, as Danny Trejo is the only person who looked familiar. The way the shots are cut definitely implies that you should recognize some of the other faces though.

Staying true to their roots, the Repentless video has been labeled as satanic.

The “Vigilant Christian” put together this video outlining the satanic messaging that is woven into the video.

To which we say… noooooo shit sherlock. Kudos for being nuts enough to make a 13 minute explainer video tho.

What did you think of Slayer’s Repentless song & video? Take 3 minutes and share your nickel’s worth in the comments below.

66%
Summary: Slayer re-emerges with a middle of the road thrash track and an awesomely gorey prison riot video full of people you will recognize but not know their names.
DEAF THREAT - 66%