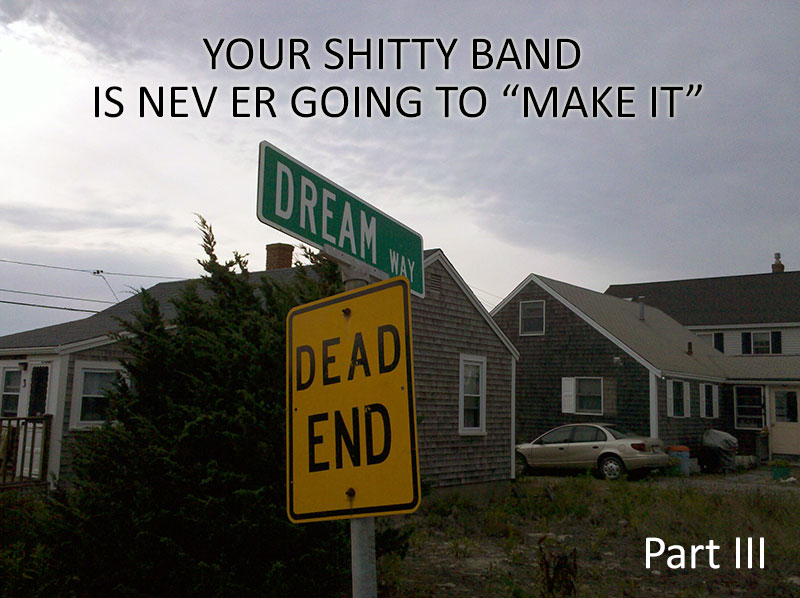 It’s been more than a minute since Dan knocked the musical deamers down a tuning peg, so here it is! Two more reasons that will hopefully encourage you to give up your musical aspirations and get a real job. If this is your first brush with our oracle of common sense, read Part 1 & Part 2 before proceeding.

Let me start with an actual quote from a meeting I once had with a dude in the single sketchiest office I’ve ever been in: “What kind of car do you want to drive? Stick with me and I can make it happen.”

Once again, 30 something me would wonder why I was in this awful little box of a room with nothing but a wildly outdated, stained yellow with cigarette smoke computer monitor on the desk. There was no sign of paper, a phone, or any tangible sign of any actual ‘work’ happening.

Honestly, 19 year old me was pretty skeptical, but I had just enough youthful ignorance to sit with the 5 other people involved in this project and decide: “Sure, he’s got some minimal credentials that are impressive to our young, underdeveloped brains – let’s pay this guy a few hundred bucks for what he’s promising.”

Did anything come of it?

Did it stop us from paying other assholes who came along promising the world?

The Truth
Maybe you work really hard and you’re one of the rare bands that manages to luck into moving from playing empty rooms to a small semblance of a local following.

Maybe you can eek out the niche of getting 200 people to come and see you. All you need is the wind blowing in the right direction on a Friday night and no other shows competing locally.

You’re dumb for even talking to them.

Opening spots, festivals, record deals, etc etc etc. If it doesn’t come through some sort of formal channel it’s most likely a lie someone either made up on the spot or they are an outright con man. There’s a weird segment of pathological liars that come to shows.

You can hire an agent to help you sort through and find the real offers, but that person will just rip you off too.

I supposed if fate played differently, when asked about my dream car had I answered “A burnt-out 2 door Hyundai Accent with no features that I can barely afford based on my call center income”, then that guy should be credited with eventually making my dreams come true.

#5. You have no clue how to properly market anything, let alone something as valueless as you and your buddies playing music.

You should measure your bands success with the following question; “Did a song you’ve done set the world on fire more than that single from the Fresh Princes daughter about hair-whipping ?”

We’ve already established how clever you are, so I’ll save you a headache and just answer the question for you.

That song set the world on fire more than anything you’ve ever done or ever will do and it was (and still is) pure concentrated dog shit.

It got way more plays and way more purchases and every night while she was marketing it, I imagine she played that one song to more people in one show than you’ve played to combined in your 10 years of grinding on the road.

The fix is in, and you have no place in the music marketing machine.

If you can cobble together $20,000 a year as an individual based soley on the music you play, I will eat my words and come to your sad, tiny bachelor apartment. I’ll even bring some groceries to cook up for you and your 2 room mates. You could probably use a good meal dude.

Did Dan miss a point? Drop it in the comments below. Don’t forget to share this post with your delusion friends and family members.